Lentivirus is the tool of choice for fast, efficient, and cost-effective generation of stable homogeneous cell models for strong gene expression or gene knockdown. In gene therapy, Lentiviruses are widely used for CAR-T cell therapy applications.

SIRION Biotech offers custom lentiviral vector engineering and manufacture in scales from 3E6 IU up to 2.5E9 IU with constitutive or inducible promoters for in vitro and in vivo applications. Our lentiviral vectors are 3rd generation vectors based on 3’SIN Technology, and are pseudotyped with VSV-G protein (vesicular stomatitis virus G protein) to allow robust replication and entry into the broadest variety of cells.

SIRION Benefits at a Glance

Lentivirus offer the most versatile method for gene delivery. Lentivirus infects a broad panel of dividing and non-dividing cells, including primary cells, immortalized cell lines, and hematopoietic stem cells. Recombinant lentiviral vectors offer flexible vector design, and insertion of an expression cassette which may include several genes with a total capacity up to 5 kb including the promoter, gene of interest (GOI), WPRE, etc.

Lentivirus are retroviruses with a single stranded RNA genome. It has three main genes coding for the viral proteins gag, pol, and env. These genes are responsible for viral capsid and matrix proteins (gag), viral integration and transcription of the carried GOI (pol), transmembrane proteins required for host cell entry (env).

Lentiviral vectors contain only the viral cis-regulatory elements necessary for genome integration, transcription, and packaging of the vector RNA. All genes coding for viral proteins are removed to provide space for insertion of the transgene DNA.

To ensure safety by preventing viral replication in target cells, 3rd-generation lentiviral vectors have much of the viral genome moved into separate packaging plasmids. SIRION Biotech uses 3’SIN (self-inactivating) technology – a 400 bp deletion in the U3 region of the 3‘UTR which inactivates its promoter activity. During integration of viral DNA into the host genome, this 3‘SIN LTR is transferred to the 5‘end, resulting in a provirus lacking U3 promoter activity at both ends. 3’SIN technology thus enables controlled gene expression from internal promoter(s).

In addition to the plasmid carrying the GOI, 3’SIN technology requires three packaging plasmids to provide all the protein components necessary for LV packaging and generation of infectious viral particles. Lentiviral vectors are pseudotyped with VSV-G protein for mediation of fusion of the viral envelope with a host cell.

Figure 2: Schematic representation of a constitutive lentiviral vector construct for cell model generation. Promoter and resistance can be selected based on experimental needs.

Tet All-in-ONE uses the latest 3G TET-On technology and provides both of these genes in a single vector. If the size of GOI exceeds the insertion capabilities for the All-in-ONE vector, the 2 vector system can still be used to deliver inducible large constructs. SIRION will work with you to determine the best system for your needs. 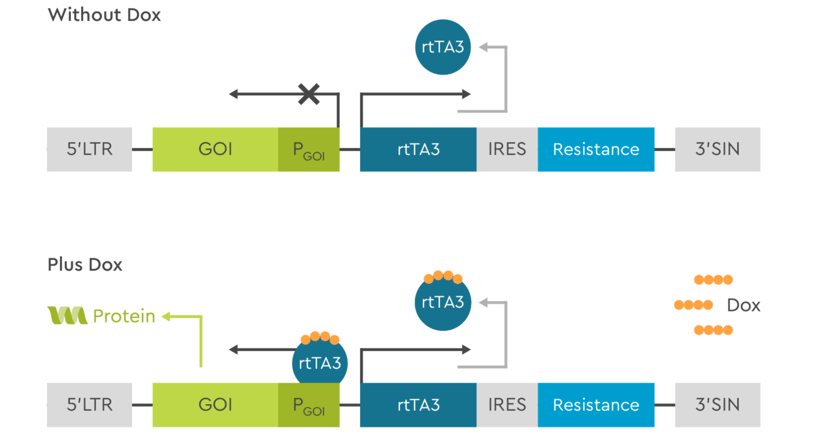 Figure 3: Schematic representation of the 3G Tet-On All-in-ONE system. In absence of Doxycycline in the medium, the transactivator protein rtTA3 is constitutively expressed but cannot bind to the promoter driving transcription of the GOI to activate it. When Doxycycline is added to the medium, it binds to rtTA3 and modifies its conformation, allowing it to bind to the promoter and activate transcription of GOI.

Figure 4: FACS analysis of stable U87MG cell pools with Tet-inducible expression of Tag-eGFP. Around 99% of the cells express Tag-eGFP when induced with Doxycycline. 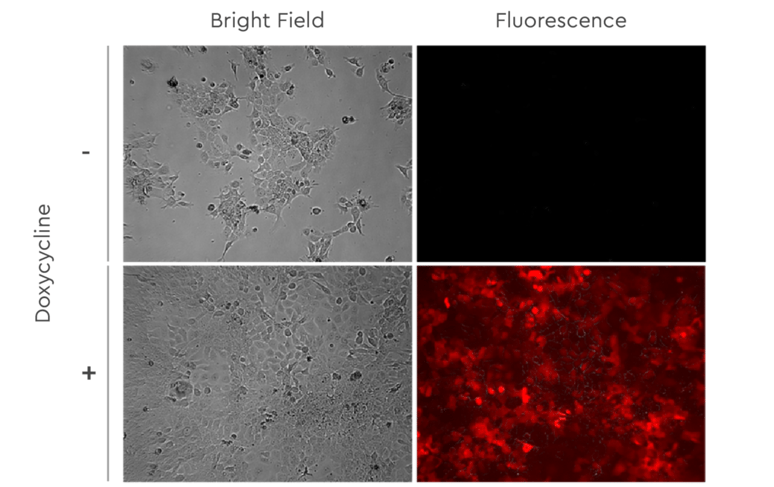 Figure 5: Fadu cells stably transduced with lentiviral vectors for inducible expression of RFP. Imaging after 48h in medium with or without 1,0 µg/ml Doxycycline.

Fields of Application for inducible vectors include:

SIRION works with you to provide the service you need, from direct manufacture using your existing lentiviral expression plasmid, to full service where we synthesize the GOI, and clone and manufacture the lentiviral vector particles.

SIRION performs standard quality control procedures on every construct. We routinely determine the physical and infectious titer and offer additional analytics according to customer need for more extensive quality control of vectors (Table 4).

SIRION offers several production stages and quantities for all levels of preclinical applications. Production parameters can be adapted to specific projects after further consultation with the SIRION team.